Why are women attracted to older men? 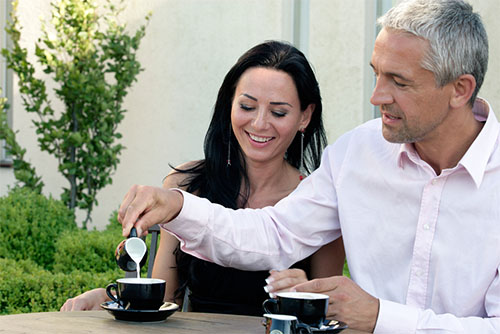 It's true to say that many younger men, on reaching the age in their lives when pubescence has taken control of their lateral thinking, find themselves fantasizing about older females, often twice their own age and upwards. For example, it's quite common for a young man, still at school age, testosterone flying everywhere, to have the 'hots' for one or more of his female teachers, a neighbor's wife or even a pal's mother.

The consensus of opinion reached by many is that the attraction by a young male to a more mature woman is based on the fact that not only does she have experience.. but a working knowledge of the male anatomy, and a sexual prowess not to be discovered so easily in a younger woman his own age.

Although there are exceptions to the rule, in the majority of cases, his secret lusting remains just that, and goes unnoticed by the older female who still regards him as a young student or friend of her son.

Howerever, as the young male grows older, and gains his own level of experience, so his desire for the maturer female wanes, and on reaching middle age, he will frequently have his head 'turned' by a much younger woman.

All this is in stark contrast to the attraction patterns noted in the life of the female of the species. Whereas the young girl, on first becoming sexually aware, will hone her intimacy skills on the younger male, yet she will often be less interested in him as she gets older, turning her attention to the more mature men that cross her path. But why is this the case?

The Sugar Daddy Phenomenon, whilst oftentimes the source of amusement for some, can in fact develop into quite a powerful relationship, with loyalty, romance and chivalry being key factors in the union. Many women note that a male around her own age or younger, will not show her the same level of respect, or pay as much attention to detail that his older counterpart will be inclined to display.

It's a valid point that most women are more mature than men at any given age, and it's not surprising that by the time she reaches her mid-thirties, she already feels more compatible with a male ten or twenty years her senior, and has left the guys her own age, far behind both mentally and emotionally. Her more mature partner is more equipped to seduce her mind as well as her body. He will be less afraid of displaying public affection, holding her hand or opening doors for her. He will be happy to allow the whole world see how proud he is to be by her side.

Sexually too, although he may not be an athlete between the sheets, he will feel the need to ensure his girl is pleasured well as a priority over seeking to satisfy his own desires. Her younger lover will no doubt give her "the best seventeen seconds she's ever had", before raiding her fridge in search of a beer. Whereas in the case of her older lover, the foreplay will begin in the restaurant with witty flirting, eye contact and laughter. Later they will enjoy the afterglow together, the passion may have subsided but the emotion still very much alive.

The term 'Sugar Daddy' was first used in the early 1920's and is described in the WordWeb Dictionary as "A wealthy older male who offers a young person expensive gifts in return for friendship or intimacy". The 'sugar' in this early term alluded to the sweetening role of the gifts, and 'daddy' to the age difference between the pair. There is no mention however, of love, romance or indeed a relationship in the dictionary description of the term, yet it is a fact that women are often attracted, even turned on by men of substance or power. Is it so inconceivable then, that a younger woman could find happiness in a relationship with a guy old enough to be her father, who has so much more to offer her than money and gifts?